Message Sent
Thank you for your inquiry. We will respond to you as soon as possible.

You are at: Planned Giving > Donor Stories 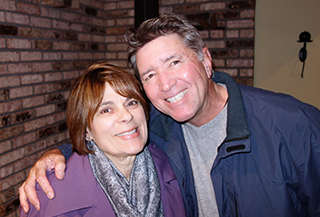 From rock concerts at the foot of the bell tower to the camaraderie among classmates in a tightknit community, Mike and Annette Sechrest share many fond memories of their time at UC Riverside. Topping the list: the night they met—at a 1967 Valentine's Day dance at the cafeteria.

More than 50 years later, the couple, both retired educators, are giving back to UCR with a $1 million bequest to the School of Medicine Dean's Mission Award program. Their gift, "The Michael and Annette Scarpino-Sechrest Endowed Scholarship Fund," will support talented, financially deserving students who commit to practice medicine in Inland Southern California for several years after qualifying.

When the couple moved to Tucson for Mike's job, Annette earned her teaching credential at the University of Arizona. Both enjoyed long careers, Mike with the Flowing Wells Unified School District followed by a professorship at the University of Arizona, and Annette with Flowing Wells and Tucson Unified Schools with a 13-year stint working for The American Federation of Teachers in between. The veteran teachers both credit UCR for their professional successes.

"When I came to UCR in 1964, there were only around 3,000 students which was fewer than in my high school in San Bernardino," Mike said. "UCR had a very pleasant feel, and we were a close group of students and professors."

Annette, who was born in New York, moved to California with her family as a young child. After attending a Catholic girl's school in Riverside, UCR opened her eyes to a world of career possibilities for women.

"The professors were so dedicated, and I was amazed by their knowledge and how well they communicated it to us," Annette said. "They taught us critical analysis and problem solving. Years later, when I was teaching myself, I realized I was mimicking them. That's when I knew the things I'd learned at UCR had really stuck."

While building a life in Arizona in an era before email and Facebook meant the Sechrests lost touch with campus happenings, the couple continued to feel a connection with their alma mater. A tangible reminder: a stray brick Mike snagged during the 1966 construction of the bell tower that has served as a bookend ever since.

Several years ago, during their estate planning process, Mike and Annette started to think about ways to give back to UCR. The Dean's Mission Award, which supports students who pledge to practice medicine in the Inland Empire, seemed like a good fit.

"We were pleased that UCR established a School of Medicine to serve communities in the Inland Empire and we wanted to contribute to something that would grow," Mike said.

In addition to their $1 million bequest, the Sechrests have begun making contributions to support current Mission Award recipients, a decision spurred by the economic hardships the coronavirus pandemic has caused many families.

"My goal is to complete my psychiatry residency in 2024 and continue serving as a psychiatrist in the same community I first grew to love nine years ago when I first moved to Riverside," she said. "I am so grateful to the Sechrests for their generosity and wonderful gift they have provided me with."

For information about opportunities to give to UCR students, research, and programs in areas that are meaningful to you, please visit www.ucr.edu/giving-support. For more information on how a planned gift can help you leave your legacy and impact the future at UCR, visit planmygift.ucr.edu.

Gifts by Will or Living Trust

You may be looking for a way to make a significant gift to help further our mission. A bequest is a gift made through your will or trust. It is one of the most popular and flexible ways that you can impact the future at UCR.

Gifts of Stocks or Bonds

Donating appreciated securities, including stocks or bonds, is a simple and tax-effective way for you to make a gift to UCR.

Almost any form of property, such as works of art, antiques and other personal items can be a suitable gift to UCR. In many cases, the full appraised value of the property on the date of the gift will be credited to the university.

Gifts of intellectual property such as copyrights, patents, royalties, licenses and technical data are welcome at UCR. The tax and legal provisions that govern these gifts vary according to the type of property.

Donating part or all of your unused retirement assets such as a gift from your IRA, 401(k), 403(b), pension or other tax-deferred plan is an excellent way to make a gift to UCR.

Learn more
Living the Promise
The Campaign for UCR
Invest in UCR
Give a Gift Now
UCR Alumni
Connecting over 100,000 Highlanders
University Advancement
Who We Are
UCR Foundation
Learn More